Talk about slow stitching is what I am going to do this time. Hand stitching is SLOW so I have to wonder why it has to have all it´s own little movement but I maybe had better not be too negative. For me stitching is a slow process starting with the idea or, no not the idea but the thing that sparks the idea like the tomato root taken from the growing bag and so so perfect that it just had to be used. From there to the idea was but a little step borne by the current xenophobia that seems to rule in the Danish political system not to mention lots of other rich countries. I wonder just how the pig farmers in many states in the US would manage if they did not have the cheap Mexican labour or the supermarkets in Norway where we were the past two weeks, there they were Africans doing most of the work and doing a good job at that. Not forgetting all the hospital staff that have helped me through the last 1½ years. 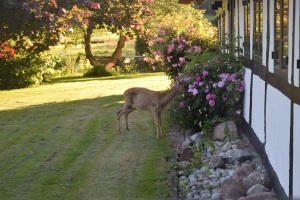 Just before I left I took a photo of this visitor from right here where I am sitting now busy eating roses. Picture on the right is a view from our cabin in Botnedalen with other animals grazing while I sat on our new terrace stitching on a portrait which I intend to use as the backing for “Roots”. I like this two sided art, a bit like the banners that are so popular, again in the good old US of A. Gives an added weight to the idea that are, at least, two sides to any point of view. Good and bad sides to any development and we just have to like it or lump it! Sorry about that I have also been listening to a whole lot of Stuart Macbride  books while sewing. Wallowing in lovely stories to forget from my homeland, taking place in towns that I know and in a language that I had almost forgotten. I understand the humour of the  North East Scots as I will never fully understand the Danish.

Anyway this is the result! Thank you all those who have been so kind as to give me permission to use their names. The backing is also old metis but not quite as old or worn as the front since there was none of the same quality for sale on ebay at the time, however, this is not all bad since I can use this in order to make a “border” for the front! Size is 103 x 48 . Bye the bye it IS a self portrait and the hair I have is all my own.

I have done quite a lot of stitching. One called “The Sower and the Reaper” was the result of part of the doodling internet course I did nearly a decade ago with Susan Sorrel as tutor and hangs in our cabin.

It started with the idea of tearing photos out of magazines to make a collage which should be developed for an embroidery. Mine started with an areal photo of ploughing lines on a huge field, a caterpillar, a troll and a sweetcorn. Olav used bark from fir trees to cover the edge of the stretching frame which gives a fitting frame for a picture in a cabin. 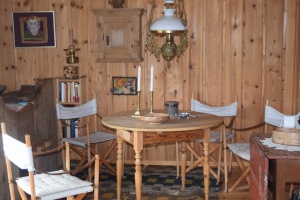 Notice the portrait  of Olav on the wall keeping his eye on future users!! Not that he is that bad but he does worry a bit about lots of things when he is not having a wee snifter on the terrace as the sun goes down 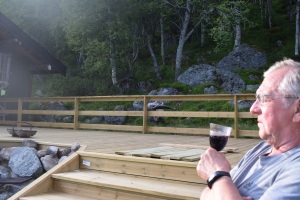 Only one of the series ” The Remains of the Day” got into Minitex 2017 but I am well pleased at that since I suspect that most folks think that a lot of my work is a bit strange! 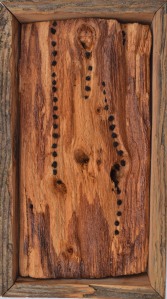 © Edith Underdal and edithunderdal.dk, 2016-2021. Unauthorized use and/or duplication of this material without express and written permission from this site’s author and owner is strictly prohibited.
Loading Comments...
%d bloggers like this: